The IAAF World Championships is the biggest event in athletics besides the Olympic Games.

For this year’s Worlds, in London, the IAAF wanted to reach out to new athletics fans. So they teamed up with Skype, one of the biggest conversation platforms in the world.

The result was SPIKES Bot. 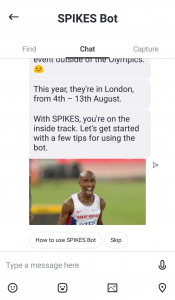 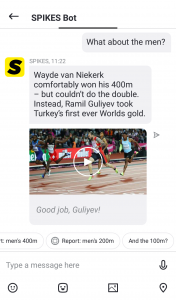 We’ve been helping Skype create chatbots with character for a while now. We worked on Heston Bot, and Your Face. But SPIKES Bot was different: a live reporting bot, bringing you the latest stories from the World Championships in a new, conversational way.

Users could watch highlights, check results, and learn more about the athletes and events. It was a fun, free way to get involved in the World Championships, wherever you were.

But I won’t, because you should see for yourself with SPIKES Bot.